Status: Pricing and hold status for all instruments currently available is shown on our Instruments 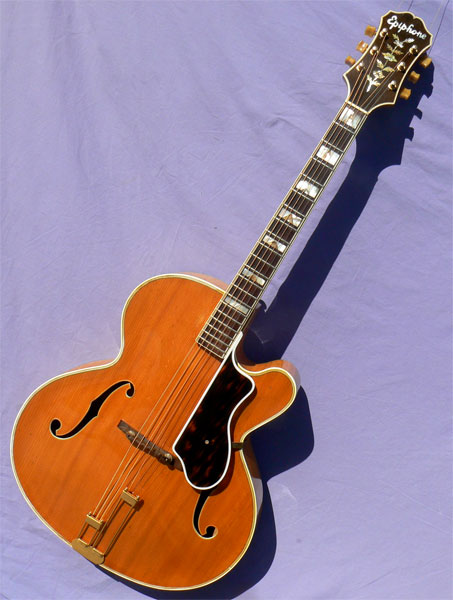 page here. If this instrument does not appear on the Instruments page it has been sold, and is no longer available. Photos and descriptions of Previously Sold instruments may be found here. To be notified of examples of this model or similar instruments in the future, please contact [email protected],. Please be specific on which instrument(s) you're looking for, and we'll be happy to contact you as soon as they become available.

Notes: The glory of the Epiphone line, the Emperor was introduced in 1935 as the largest and most costly instrument the company ever made. Epiphone produced several early prototype cutaway Emperor "Soloists" as early as 1941, but inexplicably waited until 1949 to add them to the regular catalog, a full decade after Gibson started offering the cutaway Super 400. The Epiphone Emperor Cutaway (quickly renamed the "Emperor Regent"), had a run of just seven years until the company was purchased by Gibson. As a consequence, the Emperor Cutaway remains one of the rarest and most desirable guitars of the classic era.

According to the online database of Epiphone serial numbers, this remarkable instrument is the earliest known example of the Emperor Cutaway found to date. Built in mid-1949, this historic guitar shows that Epiphone had its eyes set squarely on the competition. Not only was the massive 18 1/2" lower bout larger than the Gibson Super 400, but the cutaway on the new model was several frets deeper as well, extending the useful range of the fingerboard. (Though bigger in the lower bout than the Super 400, the Emperor is paradoxically more comfortable to hold, however, as the upper bout is a full inch smaller than its Gibson counterpart, and the waist is narrower as well.)

One feature of this exceptional guitar is of particular interest: its distinctive and unusual fingerboard inlay. The traditional split-block pattern is inverted, with the colorful abalone wedges pointing upward toward the headstock, rather than down towards the body, as is customary on the model. This prototype feature has only been seen on two other Emperors, both noncutaways, and only from mid-'49.

The back of this spectacular instrument is carved of rare bubble (or blister) maple, with neck and sides of deep tiger flame. The grain pattern and coloration of the bookmatched, quatersawn soundboard are typical of Adirondack spruce as well. The top and back are lavished with a full nine plies of binding, and the peghead is in the classic prewar style, with its graceful tree-of-life inlay unencumbered with the truss rod cover of later examples. (The hex-key adjusting rod is concealed under the end of the fingerboard, in traditional Epi style.)

The instrument has been maintained in gleaming condition, with all-original gold hardware, and a handsome recent bound tortoise pickguard, hand crafted from an original template. The original blonde finish of the body has ambered to a warm honey color, with only a small bit of spot touchup to the back at the rim near the endpin. The tiger maple neck is intensely flamed and retains its original finish as well, now protected with a light dusting of clear vintage style lacquer. A pair of small screw holes have been filled in the treble waist, suggesting the instrument was at some point fitted with a lefty guard, and the usual tiny DeArmond rod screws in the fingerboard extension have been soundly filled as well.

Apart from some light buckle wear and a few scattered lacquer dings, the instrument shows few signs of play, no apparent cracks, and remarkably little checking. With its massive acoustic voice, the guitar has an open, vibrant lower register; clear, sparkling highs with pronounced natural reverb, and truly exceptional power and projection. The parallel braced soundboard is hand-graduated, and the neck profile has the classic Epi light vee contour, with excellent pro fretwork and smooth low action over a fresh, high-precision setup. Even the original deluxe brown hardshell case is every bit as fine as its contents.

A pioneering instrument of exceptional rarity, performance, and appeal, this historic guitar is a outstanding opportunity for the player and collector alike. One only: call now. 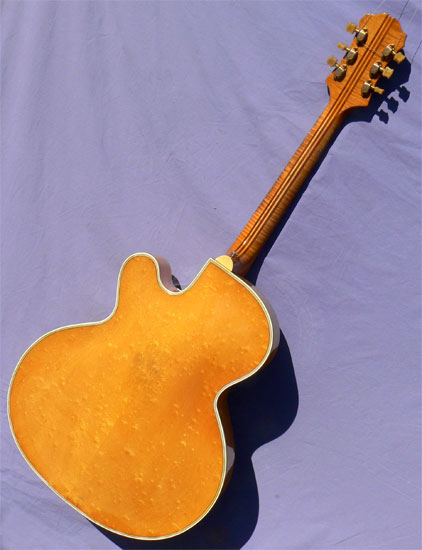 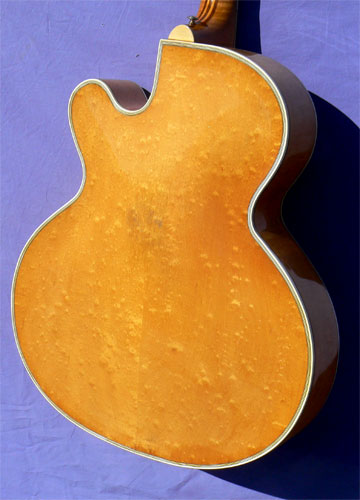 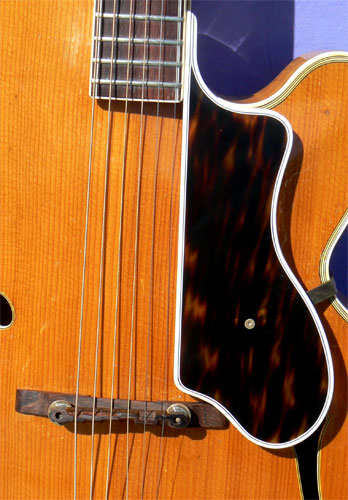 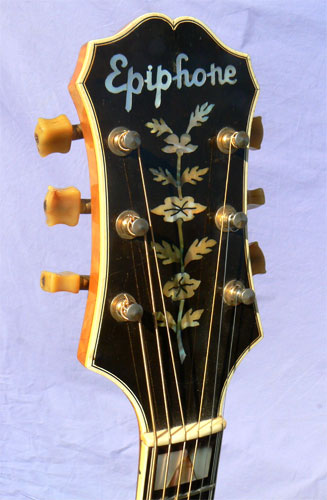 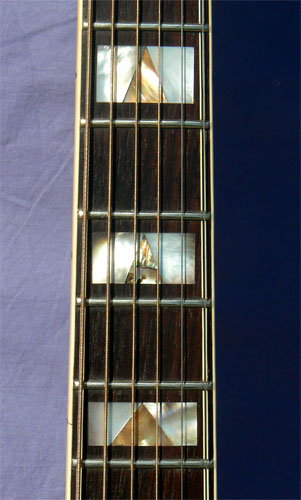 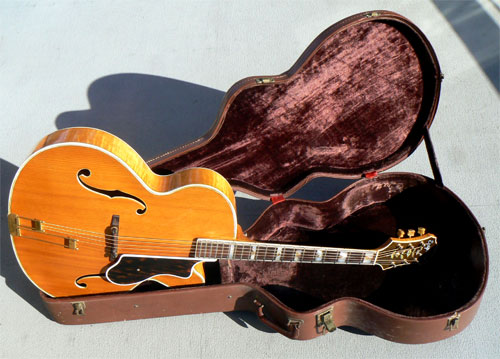