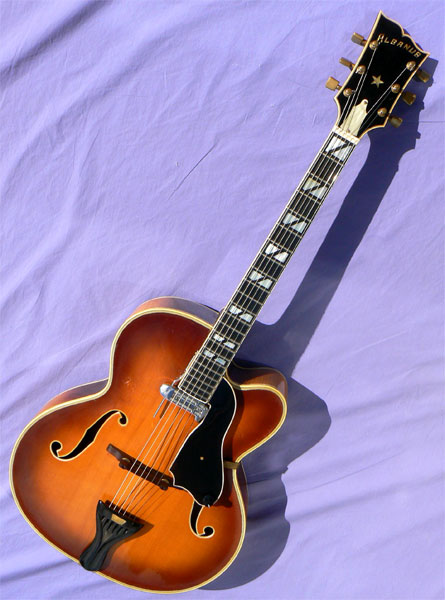 Notes: The decade of the 1960's saw the most explosive increase in guitar sales in the history of the instrument. In the wake of the folk revival, the British Invasion and the legacy of Elvis, baby boomers kept guitar manufacturers scrambling to meet exponentially increasing demand. Swamped in the tsunami of mass produced dreadnoughts and solid bodies, the venerable archtop guitar kept a lonely vigil at the top of the catalog, with the major manufacturers showing their lowest production figures in history.

Nowhere was this more true than in the rarified world of the hand built guitar. D'Angelico's long career had ended with the beginning of the decade, and his successor D'Aquisto wouldn't fully hit his stride until the next. Stromberg had passed away in the mid-50's, and the renaissance in hand building sparked by Benedetto and his followers was almost a quarter century away. Despite the setbacks, a hard core of working session players, sidemen and soloists continued to demand hand-carved instruments crafted to their exacting specifications. Into the void stepped Carl Albanus Johnson.

According to Chicago guitarist Chuck Kling, Johnson was a Swedish immigrant schooled in violin making. He is said to have learned guitar craft at the Boston workshop of Elmer Stromberg, another builder of Swedish heritage. Relocating to Chicago in the 50's, Johnson built a reputation among the working players in the area with his finely crafted instruments which, like those of D'Angelico, were presumably built to order. Albanus archtops are among the rarest of American guitars, with rough estimates ranging from perhaps fifty to a hundred examples, built between the mid-50's and Johnson's death in 1977.

Had there been any doubt that Johnson learned his craft at the Stromberg factory, this guitar settles the question definitively. On inspecting the interior, we found that the soundboard is supported with a single diagonal brace running from the lower treble bout to the upper bass. This bracing system is a Stromberg trademark, and this is only the second Albanus guitar we've seen to employ this innovative technique.

The body is handcarved tiger flame maple, bookmatched in a dramatic chevron pattern on the back. The handcarved spruce top is quartersawn and bookmatched, with crossgrain silk from rim to rim. The body binding is extravagant, with a full nine plies on the body and triple bound f-holes. Of particular note is the handcarved ebony tailpiece, which reflects Johnson's roots in violin building. Predating D'Aquisto by a number of years, Albanus may deserve credit for introducing the wooden tailpiece on the modern archtop guitar. Expertly contoured with a slim contemporary feel, the neck is reinforced with a three piece centerstripe and has smooth low action over a solid ebony fingerboard with excellent medium jumbo frets.

The guitar is fitted with an original DeArmond floating Model 1100 adjustable Ryhthm Chief pickup with volume control and endpin jack, Albanus' favorite method of amplification. A recent bound black pickguard from an original Albanus template is installed as well. Most remarkably, the tuners are engraved with the Albanus monogram, and we understand that Johnson machined them himself by hand, an astounding feat without equal in modern luthiery. Again, we've seen these on only one other Albanus guitar, and whimsically, one of the monograms is reversed.

This example has been maintained in wonderful condition, without pick, buckle, thumb or fingerboard wear in the all-original sunburst finish. Some small dings have been touched up above each soundhole and a short grainline crack near the tailpiece has been soundly cleated. The original multi-ply binding is tight to the body, and the guitar shows ony light normal checking, mostly around the upper back. The body is particularly light in weight, just 5 lb. 13 oz., and the voice of this guitar has unusual depth. Of particular note is the remarkably resonant bass response, with a clear, crisp bark and commanding projection.

The instrument is offered from the estate of the late Dick Curtis, noted Chicago jazz guitarist, who concluded his career in the Phoenix area. A superb working instrument, and one of the rarest American archtops, the Albanus is a continuing testament to the Stromberg of the Windy City.

Setup: This instrument is strung with medium gauge bronze roundwound strings (.013-.056). The guitar will accommodate lighter or heavier gauge strings, according to preference. String action is set at 5/64" to 6/64" at the 12th fret, with moderate relief for acoustic playing with medium strings. The action may be lowered or raised to your requirements with the adjustable bridge. 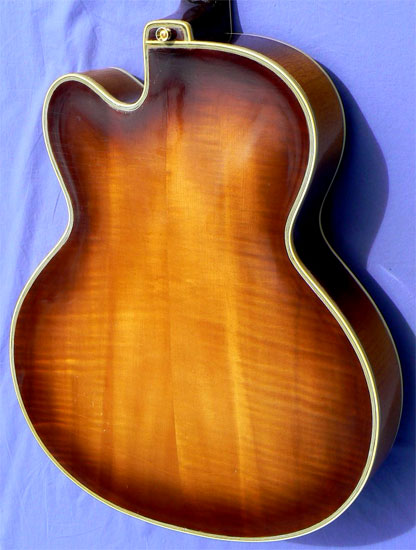 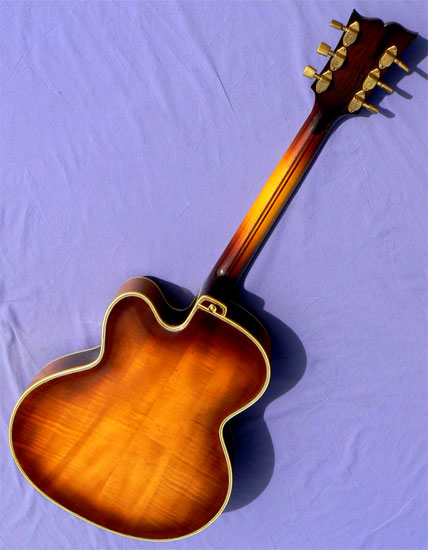 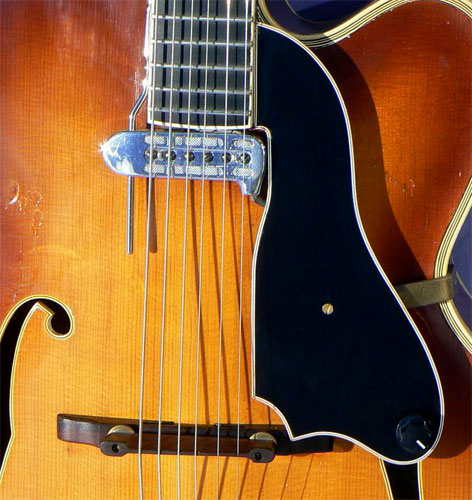 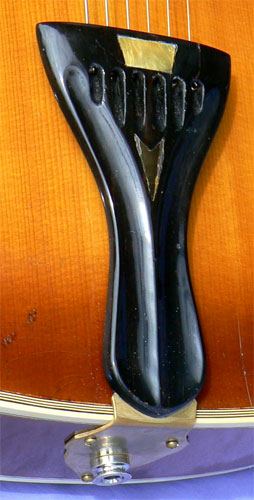 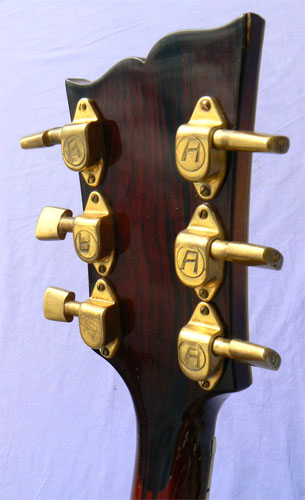