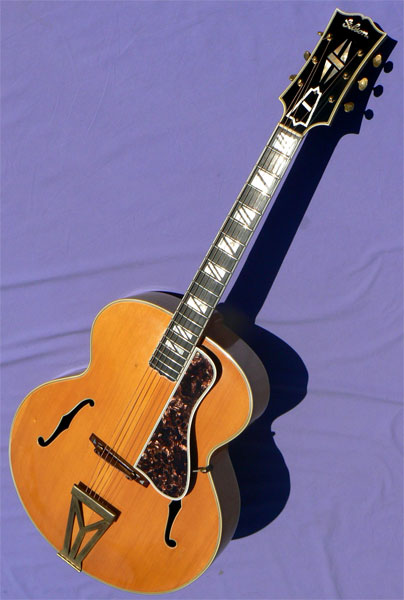 Notes: Mrs. McBurney named her son Alvin. But the world would know him soon enough as Alvino Rey.

Born in 1911 in Oakland, CA, young Alvin showed an early propensity for both music and electronics, both of which would prove key to his later success. As a teen, he was one of the youngest ham radio operators in the US, and given a banjo for a birthday present, became so proficient he eventually replaced none other than Eddie Peabody himself in Phil Spitalny's orchestra. Ever attuned to technology, Alvin attached a primitive pickup to his banjo, becoming one of the first performers in history to appear with an amplified instrument.

Switching to guitar in the late 20's, McBurney changed his name to Alvino Rey, capitalizing on the rage for Latin music of the day. An early and enthusiastic proponent of electrified instruments, by 1932 Rey was performing with Lloyd Loar's pioneering Vivi-Tone electric guitar, as well as one of the first Rickenbacher 'Frying Pan' electric Hawaiian lap steels. The first prominent big band soloist on the electric steel guitar, Rey was featured regularly on national broadcasts with the Horace Heidt Orchestra, reportedly becoming the highest paid sideman of the time. As the era's most celebrated performer on electrified strings, Rey was soon contracted with Gibson to help develop their first electric pickup, soon made famous by jazz pioneer Charlie Christian.

While working with Gibson in 1935, Rey became one of the first three owners of the firm's newly announced super jumbo orchestra guitar, along with celebrity guitarists Tony Romano and Muzzy Marcellino (joined soon after by one Rhubarb Red, later known as Les Paul.) Larger and costlier than any archtop guitar previously offered, Gibson's Super 400 model was crafted exclusively from the firm's most extravagant tonewoods. On this instrument the initials 'A.R.' are handwritten on the inside back behind the label, an indication that Alvino quite likely hand-picked the intensely flamed, perfectly bookmatched tiger maple that graces the back, sides and neck himself.

But above all, one custom feature set Alvino Rey's Super 400 apart from the pack. Unlike the burnished 'Cremona' sunburst finish hitherto universal on archtop guitars, Rey's custom instrument was finished in a natural blonde lacquer, helping the featured soloist stand out prominently on the bandstand. And thus did Alvino Rey's prized Super 400 become Gibson's first blonde archtop, and the one and only small shouldered first generation S-400 ever built in natural finish, which did not become a standard offering until 1939.

With its graceful body, extravagant engraving, and spectacular tonewoods, this guitar is an exceptionally attractive example, one of just 91 Super 400s produced in its debut year. With its original hand engraved gold hardware, this magisterial instrument is fitted with its ornate hinged trapeze tailpiece and premium floral pattern Grover Stat-Tite tuners: even the pickguard bracket is graced by the engraver's artistry. The signature marbled pickguard material, exclusive to the model, is wonderfully intact, and the original multi-ply binding remains tight to the body. Both the heelcap and label are decorated with Old English calligraphy, and the single-footed rosewood bridge is adorned with pearl wedges at its base, echoing the art-deco inlay on the front and back of the peghead. (Interestingly, an additional original Gibson double-footed rosewood bridge base is included, perhaps so Rey could experiment with variations in tone.)

Meticulously maintained in a fine private collection, the instrument shows no pick, buckle, thumb or fingerboard wear. An entry in Gibson's ledger from March of 1936 indicates the guitar was sent back to the factory for repair or refurbishing, at which time the original blonde finish may have been replaced, and the light scattered checking in the warmly ambered lacquer suggest a finish of considerable age. A few small filled screw holes near the fingerboard would indicate where a flush mounted pickup was once installed, and a short grainline crack under the pickguard was soundly splinted and cleated long ago. The back of the neck is as smooth as an old cello, and the comfy 10' radius fingerboard is a full 1 3/4" in width, most welcome to contemporary players. The gentle C profile neck is solid but not clubby or veed, with fine high recent fretwork, and smooth low action over a fresh high-precision setup.

Enhancing ease of play is the smaller upper bout, a body distinctly more comfortable to hold and play than the larger, later versions of the model. The X-braced soundboard produces a voice that is notably rich and clear, with truly cavernous depth, resonance and projection. No mere museum piece, this magnificent guitar is a superb performing instrument, and easily one of the finest sounding examples of this model we have ever had the pleasure to play.

Accompanying this historic instrument is an astounding trove of Rey's personal photos, memorabilia and ephemera, including signed promo stills, postcards and handbills dating from late '20s on, all tucked in the original Gibson deluxe brown pigskin plush lined hardshell case. This one-of-a-kind guitar combines the highest standards of playability, looks and rarity, and represents a unique opportunity both for the serious player and collector alike.

Please feel free to call to arrange an in-hand demo by phone, Facetime or Skype at your convenience, and we'll look forward to hearing from you soon: 206.325.3737.

Setup: Trussrod tension and neck relief adjusted; bridge height adjusted; bridge compensation set; string slots at nut and bridge inspected and recut as necessary; bridge foot contour inspected and fit to top as necessary; bridge radius inspected and recurved as necessary; bridge wheels and tuners lubricated; fingerboard and bridge oiled; body and neck cleaned and hand polished. This instrument is strung with medium gauge bronze strings (.013). The guitar will accommodate lighter or heavier gauge strings, according to preference. String action is set at 4/64" to 5/64" at the 12th fret, with moderate relief for acoustic playing with medium strings. The action may be lowered or raised to your requirements with the adjustable bridge. 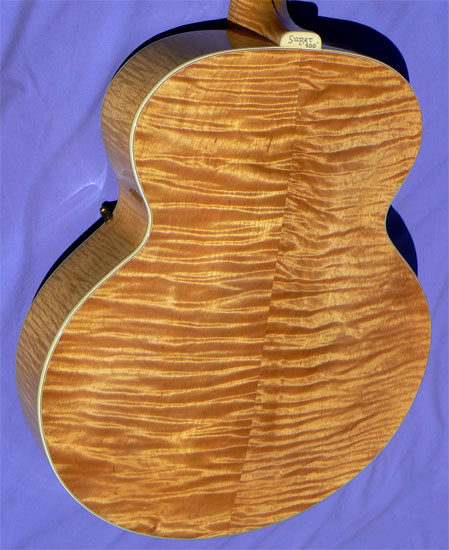 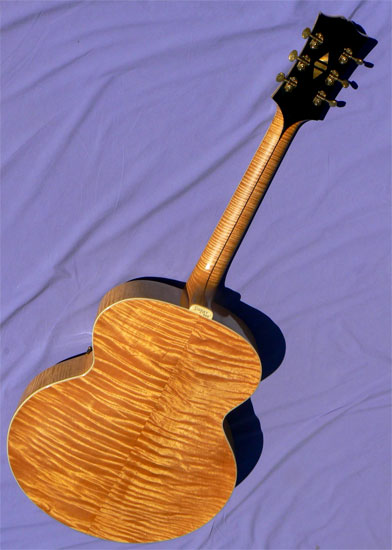 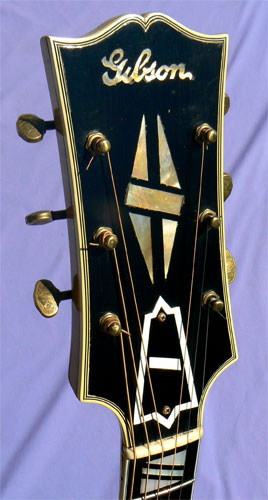 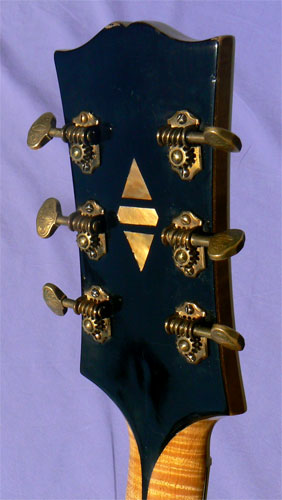 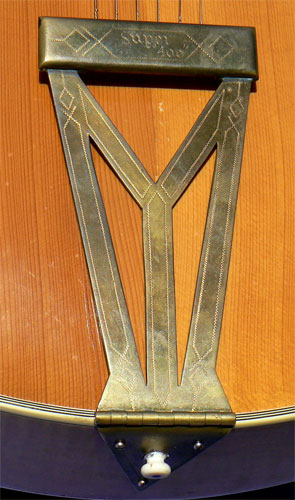 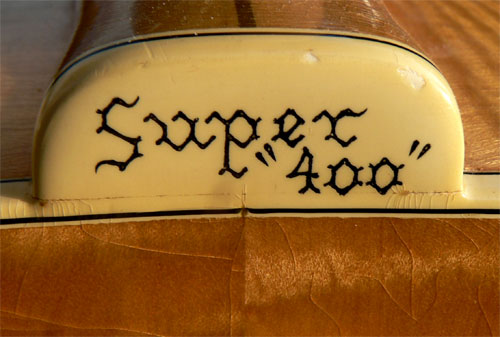 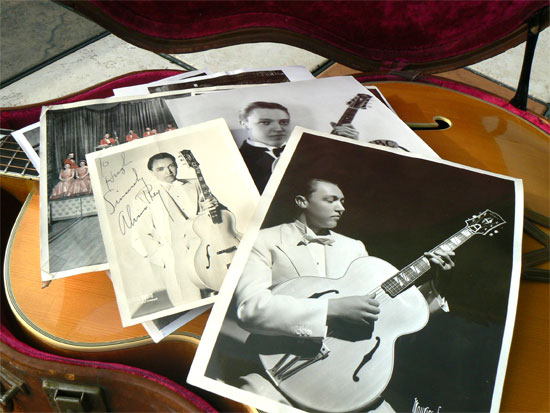