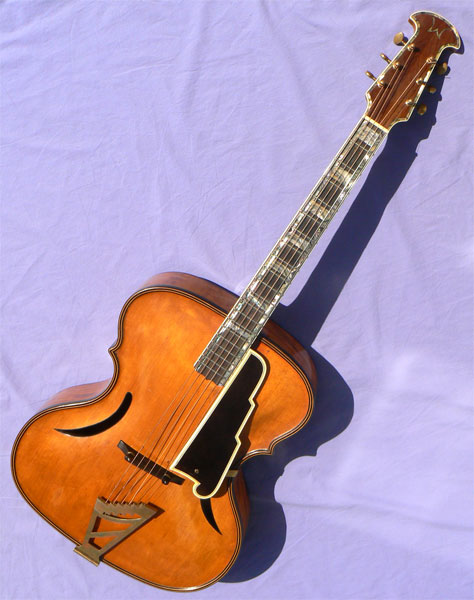 Status: Pricing and hold status for all instruments currently available is shown on our Instruments page here. If this instrument does not appear on the Instruments page it has been sold, and is no longer available. Photos and descriptions of Previously Sold instruments may be found here. To be notified of examples of this model or similar instruments in the future, please contact [email protected],. Please be specific on which instrument(s) you're looking for, and we'll be happy to contact you as soon as they become available. .

Notes: William (Willi) Wilkanowski was born in Poland in 1886 and had completed his training as a violin maker by age 17. Emigrating to the US, he reportedly worked for Oliver Ditson in Boston in the '20s, and later in New York, where his violins were prominently featured in the Gretsch catalog. His workshop in Brooklyn was exceptionally prolific: by one estimate producing over 5100 viol family instruments by 1942. Fred Gretsch may have persuaded Wilkanowski to use his considerable skills to compete with D'Angelico and Gibson in the production of high-end hand archtop guitars. In any case, between around 1937 and 1942 he built an estimated 30 hand-carved guitars, some branded with the 'Airway' logo.

The history of this striking instrument is fascinating, as it is the only Wilkanowski guitar known to have been worked on not only by its maker, but by the legendary John D'Angelico himself as well. Like all known Wilkanowskis, this example was originally built as a six string, but was subsequently converted to a tenor guitar by D'Angelico, who added his own four string neck, along with his signature art-deco tailpiece and pickguard. (The faint footprint of D'Angelico's tenor bridge remains visible on the soundboard, just north of the original bridge placement.)

A few years ago, the guitar was restored to it's original configuration by the renowned Bavarian luthier Thomas Amberger, who meticulously duplicated an original neck from perhaps the most ornate Wilkanowski known, an instrument from the inventory of the late Harry West. With a headstock facing of bookmatched black walnut, the neck is bound with wide inlays of rainbow colored Paua abalone, which also appears in the block position markers of the solid ebony fingerboard. The crescent shaped peghead is another Wilkanowski trademark, and is said to have been the inspiration for that used on the Ovation guitars some three decades later. The crescent shaped soundholes are a feature of the builder's later instruments. They strongly resemble those of the Renaissance viola da gamba, and whether they inspired Gretch's cat-eye soundhole design (or vice versa) may be a question for the ages.

The multi-ply hardwood body binding is another distinctive feature of these unique instruments, later adopted by D'Aquisto, Benedetto and other high-end luthiers in the intervening years. Finally, the back of this spectacular guitar is carved from a single solid piece of extravagantly figured Po River poplar from the Lombardy region of Italy, popular with fine violin makers for centuries. This is all the more remarkable give the size of the instrument: at over 17" in the lower bout, it's the largest size built by this maker, and single-piece tonewood in this dimension is virtually unobtainable, especially with this sort of extravagant curl. (In over three decades, we have seen no more than one or two archtops with true carved one-piece backs ever.)

The instrument has been maintained in superb condition, with the all-original varnish finish now deeply ambered to a rich golden hue. Playwear is minimal for an instrument of this vintage, and the body appears free of cracks or repairs. At just 6lb. 9oz, the guitar is nicely lightweight for an instrument of its size, and well balanced for playing. The tap-tuned, hand-graduated, parallel braced soundboard produces a massive acoustic voice: clear, throaty and deeply resonant, with fresh high fretwork to optimize the projection and dynamic range. The neck has a gentle C profile, with smooth, low action over a fresh high-precision setup.

A true showpiece, and an exceptional player, from one of the most imaginative builders of the 20th century. One only, call now.

This instrument is strung with medium gauge nickel strings (.013-.056). The guitar will accommodate lighter or heavier gauge strings, according to preference. String action is set at 4/64" to 5/64" at the 12th fret, with moderate relief for acoustic playing with medium strings. The action may be lowered or raised to your requirements with the adjustable bridge. 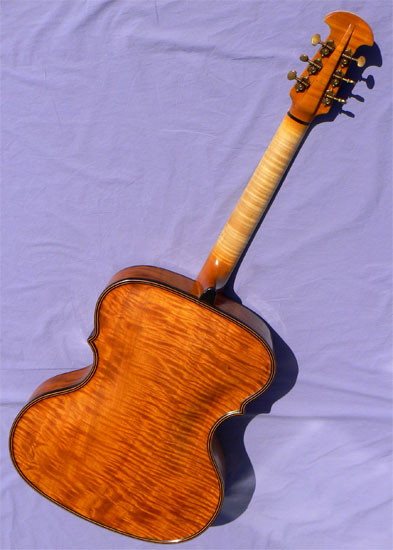 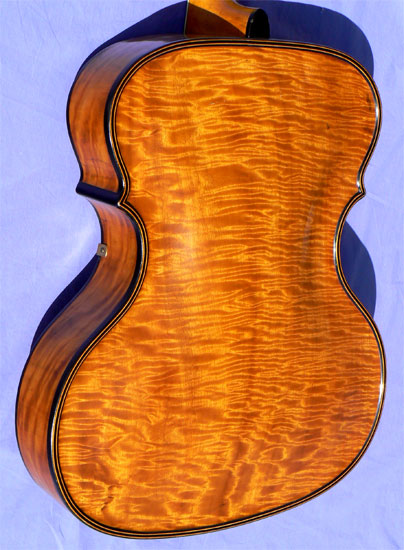 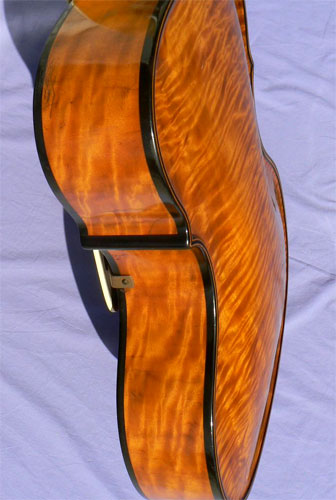 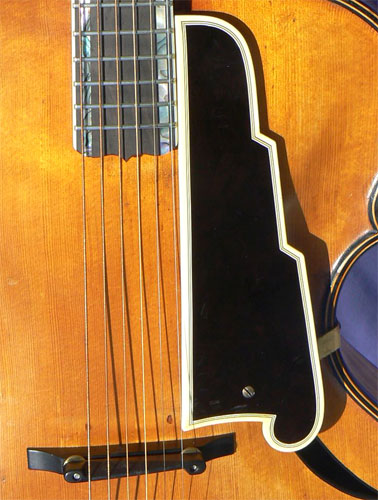 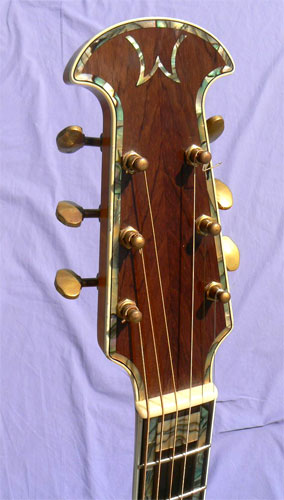 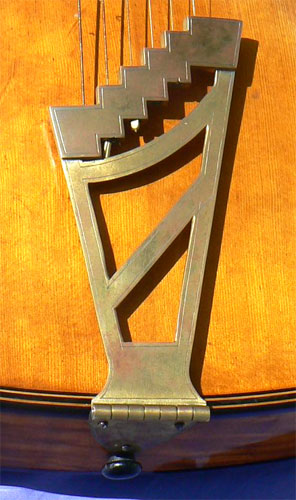