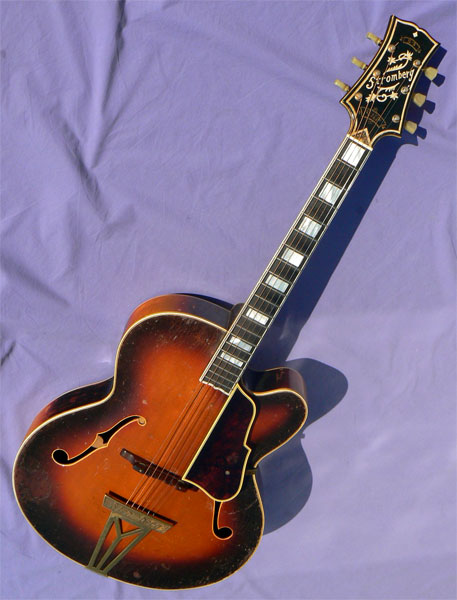 Notes: The brainchild of Nashville session aces Hand Garland and Billy Byrd, the Gibson Byrdland has been an iconic jazz guitar since its inception in the mid-'50s. But its story really starts in a small, dusty luthier's shop in Boston, Mass.

Charles and Elmer Stromberg built some of the most celebrated and highly prized archtop guitars in the history of the instrument. From their workbenches at 40 Hanover Street, they hand-built guitars to order for some of the greatest players of the Big Band era, including Freddy Green, Irving Ashby, and many others. The only serious rival to John D'Angelico, Stromberg created the legendary Master 400 model, the largest archtop ever produced, a guitar that remains the most highly prized (and priced) collector's archtop of all time.

Like D'Angelico, Stromberg produced a varied line of instruments, including this scarce model, the G-5, which was introduced around the year this guitar was built. According to Stromberg authority Jim Speros, the G-5 featured the newly popular cutaway body, and perhaps a dozen were produced in total. Most intriguingly, the G-5 offered a truly revolutionary feature: a compact scale length of just 23 1/2".

Previously unseen on an archtop guitar, this fingerboard was a full two inches shorter than a conventional L-5. This closer fret spacing expanded player's harmonic options by putting longer stretch chord voicings within reach, as well as speeding lead runs under the fingers. This attracted the attention of noted recording artist Barry Galbraith, who was so impressed that he purchased a pair of G-5s himself. It was on Galbraith's recommendation that Hank Garland ordered a Stromberg Deluxe with the same short scale, a guitar built just six serial numbers later than this G-5. And its short scale neck was a specification Hank would forward to Gibson for the very first Byrdland prototype. And the rest, as they say, is history.

This striking example was purchased new by Boston guitarist Murray Nichols, who owned the instrument for over half a century. Though his initials are inscribed on the instrument's label, little is known of Nichols, but it's clear that he truly loved his guitar. The neck is worn smooth of finish from decades of play, and the all-original sunburst lacquer shows the arm and buckle wear of a true bandstand veteran. Remarkably, despite its extensive playwear, the guitar shows no cracks or structural repairs for its long career. At just 5lb 13oz. the guitar is notably lightweight for a 17" guitar, and the soundboard is supported with Stromberg's signature single diagonal brace.

The subject of a feature article by Speros in Vintage Guitar Magazine, this remarkable instrument had its worn celluloid headplate meticulously recreated by the late Pete Kyvelos of Unique Strings, a master Oud builder honored by the National Endowment for the Arts. A truly painstaking piece of craft, the headstock facing scrupulously replicates the ornate engraving and hand painting that was a hallmark of Stromberg instruments, dating from their extravagant banjos of the 20's.

The gentle C neck is distinctly modern in feel, and a notable departure from the more clubby profiles often found on instruments of this era. Fine pro fretwork and a fresh high precision setup give the instrument smooth, low action and excellent headroom under the pick. Most especially, years of vigorous play have given the guitar an exceptionally clear, open voice, with throbbing resonance in the lower register, and sparkling natural reverb in the highs: truly a full-throttle acoustic archtop of the highest caliber.

A special bonus, the original Lifton hardshell case is accompanied by a very rare Stromberg catalog. Printed on both sides of a single 14"x17" sheet of glossy paper, it details their full line of models, as well as endorsers including Mundell Lowe and Laurindo Almeida, in addition to the artists mentioned above.

Despite the popularity of the Byrdland, their first thinline electric, Gibson never adapted Stromberg's short scale to a full depth acoustic archtop. Nor to the best of our knowledge, has any other builder in the intervening years, making the short lived G-5 an exceptional rarity in the world of modern fretted instruments.

Both father and son passed away in 1955, little suspecting that their creations would have such lasting influence. Indeed, only seventeen guitars left the shop after the Strombergs crafted this unique instrument. The label stipulates their pride in craftsmanship, with a touch of Scandinavian caution: "This guitar is guaranteed for a lifetime to the original purchaser, if used properly." We expect that one lucky owner will have years of pleasure from the proper use of this matchless piece of guitar history. One only: call now.

This instrument is strung with medium gauge bronze strings (.013). The guitar will accommodate lighter or heavier gauge strings, according to preference. String action is set at 4/64" to 5/64" at the 12th fret, with moderate relief for acoustic playing with medium strings. The action may be lowered or raised to your requirements with the adjustable bridge. 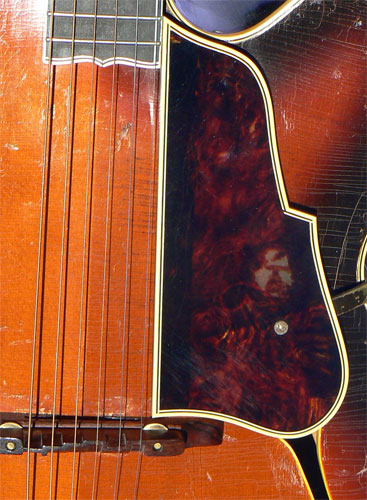 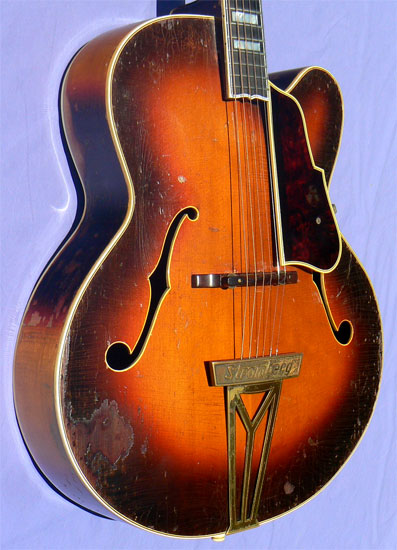 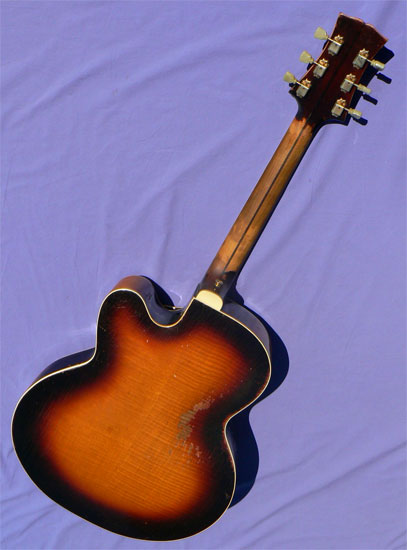 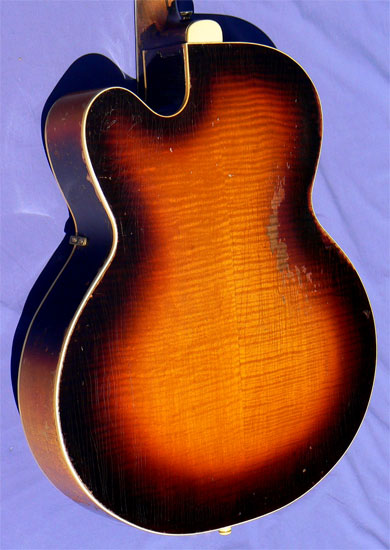 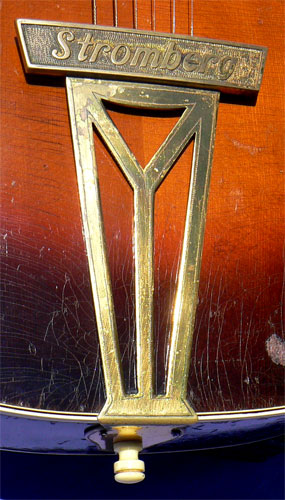 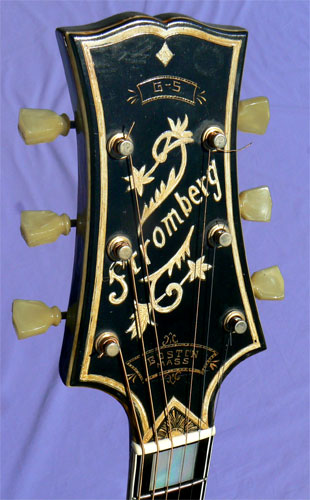 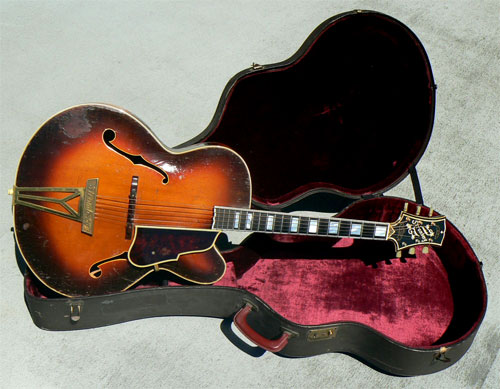 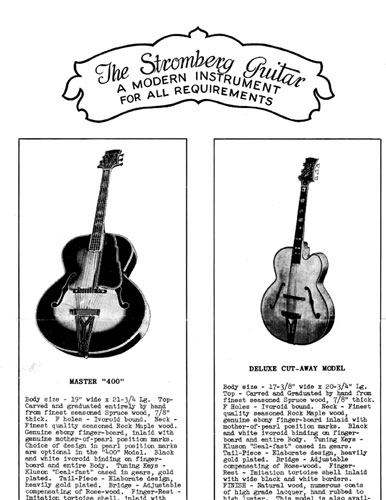 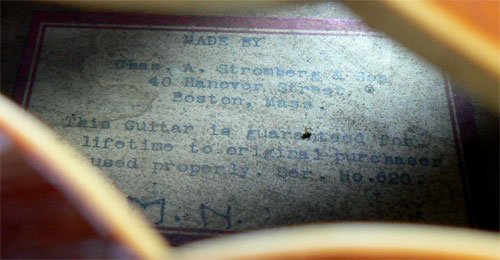