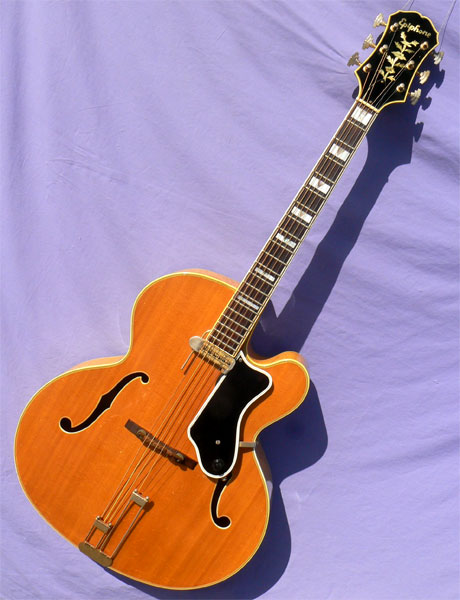 Notes: Announced in 1948, the Epiphone Emperor Regent was the long-awaited cutaway version of Epi's legendary super jumbo archtop. Though Epi had built a few prototype 'Soloist' cutaway guitars in 1941, regular production of cutaways waited nearly a decade after Gibson announced their 'Premier' line in 1939. Designated with the 'Regent' suffix, Emperor cutaways were the pinnacle of the postwar catalog, priced and positioned as direct competitors to the Gibson Super 400C. Much rarer than their Gibson counterparts, the Emperor Regents are often compared favorably to D'Angelicos and Strombergs for their massive, buttery tone.

Featuring a deeper cutaway than its Gibson rival, the Emperor Regent improved upper fingerboard access by two to three frets over the cutaway Super 4. Though the lower bout is even bigger than the Gibson super jumbo, the smaller upper bout and tighter waist (reminiscent of the earliest Super 400s) makes the body distinctly more comfortable to hold. And Epi soundboards were usually carved a bit lighter than Gibsons, which typically produced a more powerful and focused acoustic voice. Produced in very small numbers, the Emperor Regent was built until the Epiphone company closed its doors in 1956, and was sold to Gibson the following year.

Revived by Gibson in 1959, the model was rechristened the A-112 Emperor, and built on the same line as the Super 400. Though still enthroned at the summit of the Epiphone catalog, the A-112 was built in vanishingly small numbers. In fact, not a single example in natural finish was built in four of the ten years of the model's existence, with just a single blonde leaving the factory in its final year of 1969. When this magnificent guitar rolled off the line in Kalamazoo in 1963, it was one of only three made that year, out of a mere thirteen total built during the model's entire production run. Running the numbers, it's not hard to see that the A-112 Emperor was one of the rarest models ever produced at the Gibson factory.

It's well known that the earliest Kalamazoo built Epis were built with old stock parts acquired in the sale of the Epiphone company. Both the body and neck of this spectacular instrument are carved from solid, highly figured fiddleback maple, exquisitely bookmatched in a chevron pattern. As later Gibson-built Epis are constructed with laminated backs and sides, it's almost certain that this body was original Epiphone back stock acquired when the firm changed hands. In addition, the neck with its multi-ply walnut laminations, and its cursive NY style peghead logo, suggest that it too was original Epi stock, retrofitted with a standard Gibson adjustable truss rod when the instrument was assembled in Kalamazoo. Finally, the Pat. Pending Frequensator tailpiece is original NY hardware as well, with its long pointed retainer covering the endpin.

Meticulously maintained, this magisterial instrument is crafted of tonewood befitting its royal lineage. The soundboard is graduated from Sitka spruce of exceptionally fine grain, all the more remarkable for the massive breadth of the top, and carved to extremely fine tolerances. Fingerboard and bridge are solid Brazilian rosewood, the former graced with split-block inlays of contrasting abalone and pearl. The natural blonde lacquer is warmly ambered and free of pick, buckle, or thumb wear, with a few light wisps of checking attesting to its originality.

A special plus is the highly coveted gold DeArmond Model 1100 Adjustable Rhythm Chief pickup, with its volume control box and jack mounted under the guard. This vintage pickup is renowned for its clear, classic tone, and its adjustable polepieces are adaptable to a wide variety of strings, including bronze wounds. Original examples of this pickup can run over $1000 at this writing, when they can be found at all. Apart from a tiny, soundly cleated hairline crack under the volume control, and a fresh set of high precision frets, the instrument shows no other signs of repair. The gold hardware is 100% original as well, with classic Grover Imperial art deco tuners and an original bound tortoise pickguard in amazingly pristine condition.

The neck profile is classic early 60's Gibson: a sleek, elegant gentle D in contour, with a full width 1 11/16" nut. Best of all, the voice is every bit as impressive as the looks. Clear, open and deeply resonant, the guitar simply thunders under the pick, with startling projection and cutting power: a true horn killer. Few archtops ever made can surpass its combination of beauty, power and extreme rarity. We've waited over twenty years to find one of these beauties; unless you have a couple decades to kill yourself, you better call now.

Setup: Truss rod and neck relief adjusted; bridge height adjusted; bridge compensation set; string slots at nut and bridge inspected and recut as necessary; bridgewheels and tuners lubricated; fingerboard and bridge oiled; body and neck cleaned and hand polished. This instrument is strung with medium gauge roundwound strings (.013-.056). The guitar will accommodate lighter or heavier gauge strings, according to preference. String action is set at 4/64" to 5/64" at the 12th fret, with moderate relief for acoustic playing with medium strings. The action may be lowered or raised to your requirements with the adjustable bridge. 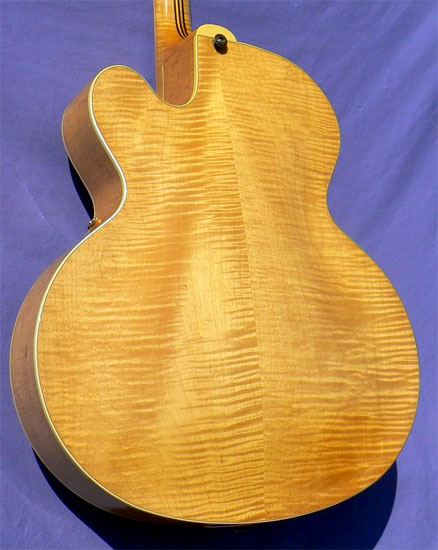 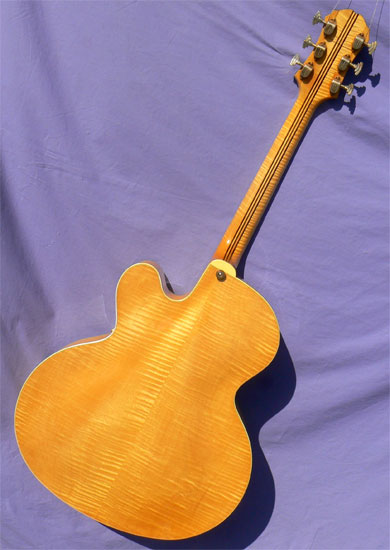 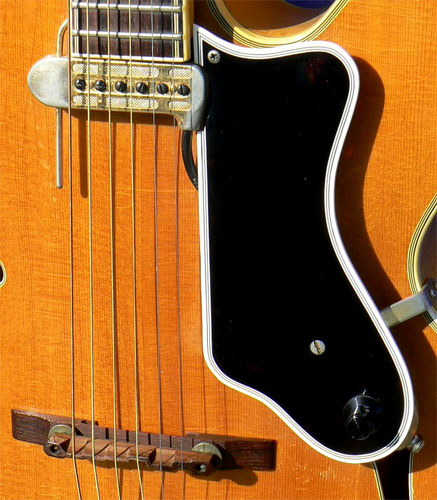 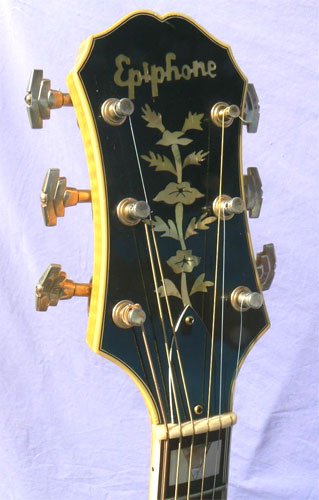 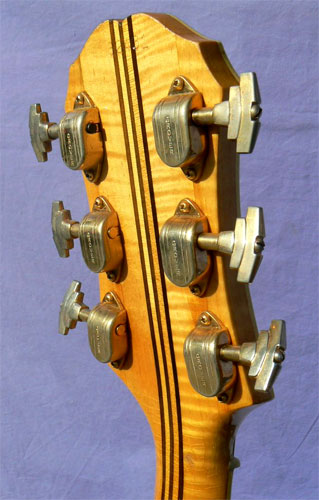 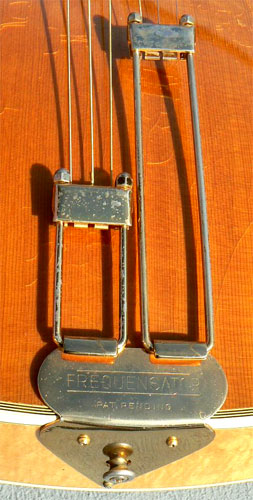